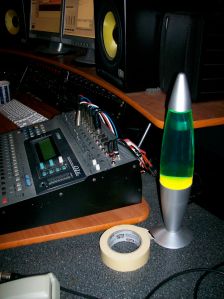 Ever notice that every picture you see of a recording studio, there’s a lava lamp near the console? Is this some strange conspiracy by Studio Engineers? Or is there some deeper meaning?

Legend has it that back in the old days engineers used lava lamps as a timer to let them know when tube mics were warmed up enough to be used.

I must say part of the reason why I have one in my studio is because of the trend of always seeing them in other studio pictures.  What I have come to realize is that its a essential part of the mojo in the studio.  Call me crazy if you like, but I hadn’t had a lava lamp wired up in awhile, and recently I was doing some re-wiring and I noticed the old thing sitting in the corner.  Being the engineer that I am I wired up the lava lamp to a handy little rack mountable powerbar strip.  That’s right I don’t even have to leave my chair to turn it on.  I flip a switch on the power bar and not only does my Cassette, DAT and Record player turn on but the soft glow of the lava lamp does as well.

You might be wondering why does a recording studio have a Cassette & Record player wired up, aren’t those technology’s super old?   They are old! in fact I hazard to guess that a lot of younger people don’t quite know what a cassette or LP are.  More often than not while doing mastering and restoration work I have to transfer originals from cassette or record masters.  Once I get the audio in the system, then I do some tweaks, get rid of the hiss and scratches, removing any unwanted material from the audio.  We can transfer most anything, but there are a few things to be aware of.  Legally we cannot transfer a album that is not your own.  And by that I mean I can’t transfer Engel Humberdinks greatest hits, even if its not commercially available anymore.  We can transfer home recordings, recordings previously released by now defunct record labels (provided they are of your band or a family relative).  Keeping in mind that you need to own the masters.

Normally restoration projects take the amount of the time the album is to transfer (60 minute cassette takes me 60 minutes to transfer into the computer) and then another hour or so to tweak and clean up (depending on how bad the audio is).

But I digress back to lava lamps and lighting in general, the studio always seems to be this farily dark place, and part of that reason is that it allows everyone to not worry what time it is.  Its kinda like when you goto a bar, you never see a clock anywhere in there do you?  So in the studio it doesn’t really matter if its 9 AM or 9 PM, as long as you are working on your music it really doesn’t matter what time it is.

Curious even google is part of the conspiracy! http://www.lovile.com/photo/google-offices-inspirations/

The Lava Lamp shows that the owner is a cool, nonconformist, artistic person.

It says that if it were 1967 you would be passing a big fat “J” to Jimi Hendrix.

apparently this lava lamp thing goes quite deep actually. Like it’s an absolutely necessity when people are setting up their studios it really is about zen. Relaxation etc

step one : get gear

step two: get a lava lamp

And remember if your going to test this theory and google image search lava lamps and you manage to find a studio without, there’s a good chance the lava lamp just needs a new bulb and is in for repair.  No studio owner would take a picture of a room without the lamp light up, that’s just crazy talk!

The lava lamp is there to provide a little mojo, groove and something familiar to remind you that you are yes in a recording studio, working on your song and loving every minute of it.